If you Google for ‘API trends’ or ‘the future of APIs’ , one technology that crops up a lot is GraphQL. Developers rave about it being a more powerful and flexible alternative to REST. Not only that but if you’re a technical writer like me, claims that it is self-documenting are particularly interesting. So what is GraphQL and is it really as self-documenting as people say?

GraphQL is an open source data query and manipulation language that was developed internally by Facebook for their mobile applications before being released publicly in 2015. Since then it has grown in popularity with some people claiming it might replace REST APIs in the future.

Like REST APIs, both operate over HTTP with requests being sent to retrieve or manipulate data. The key difference is with REST you might need to send requests to multiple endpoints to retrieve a particular set of data, with GraphQL there is only one endpoint so with a single request you can retrieve an object and all of its related objects.

For example, with this GraphQL schema and server wrapping the SWAPI (Star Wars API), you can retrieve multiple pieces of data using just one endpoint. In this case, finding out the species and home planet of Luke Skywalker by adding more fields to the endpoint:

“The self-descriptive nature of GraphQL”

There seems to be plenty of love for GraphQL on Twitter with developers praising its speed, flexibility and introspective nature. The other key attribute that crops up a lot is “self-documenting” or “self-descriptive”:

The self-descriptive nature of GraphQL and the visual, auto-completing, browser-based query builder "GraphiQL" is pure genius.

Day #4 with #graphql. I cannot emphasize enough how much I love the self-describing organism. Also… autocomplete! @GraphQL #frontend pic.twitter.com/s16qf8LBUm

One developer even went as far to say that GraphQL doesn’t require documentation at all. However, after playing around with GraphQL and experimenting with some public GraphQL examples out there, I’m not so sure I agree.

The key thing about GraphQL from a documentation perspective is the importance of naming. Lee Byron, one of developers behind GraphQL, spoke about this in his talk “Lessons from Four Years of GraphQL” at the GraphQL Summit in November 2016: “Naming things is super important in GraphQL APIs,” he said. “An important question to ask when designing APIs is ‘Would a new engineer understand this?'[… ] And that means no code names or server-side lingo.”

He continued: “Imagine that most of the engineers who are going to be using your API might not find it so easy to go and find out how that field maps to some underlying system. It’s really important not just to have names that are good but to have names that are self-documenting. Naming things that adhere closely to what those things actually do is really important to make this experience actually work.”

“An important question to ask when designing APIs is ‘Would a new engineer understand this?’ […] Naming things that adhere closely to what those things actually do is really important to make this experience actually work.” – Lee Byron

Despite Byron’s warnings, fields with poor or no descriptions were a common issue in the different GraphQL APIs I looked at. In the example below, taken from the GraphiQL documentation explorer, I had no idea what the ‘section’ query field did or what data it sent back because it had no description: 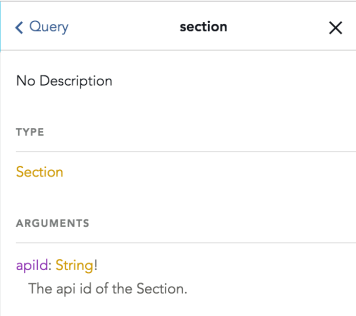 "Self descriptive"? The documentation for most things I've seen concerning @GraphQL is absolutely abysmal #GraphQL pic.twitter.com/e8C4WHTULQ

I agree that GraphQL is self-descriptive and if you’re familiar with the query language and the schema, its introspective nature means it is easy to refer to the description of a field or type to find out what it does. One of the other advantages of GraphQL is the API documentation is easy to keep accurate and up-to-date as the descriptions are pulled directly from the code. In version 0.7 or above of GraphQL, this is as simple as adding a comments directly above the type or field in the code:

However, GraphQL is only “self-documenting” if the developer or a technical writer has given the fields adequately intuitive or self-descriptive names or has added decent descriptions for them in the schema code. If the names are obscure or the descriptions aren’t great then your GraphQL API is as useful as a chocolate teapot and there are already a few chocolate teapots out there from what I’ve seen. So I guess the good news for technical writers is that we still have a role to play in helping to document GraphQL, it isn’t a magical solution that renders us unnecessary just yet!