My stepmum recently asked for help publicising something online and my first suggestion was Twitter but explaining how to use it was a challenge in itself. Although it’s been around for a decade, I still don’t think it is that intuitive for someone who is unfamiliar with the basic concepts and terminology. As a result, the help is vital in explaining how to use it, what Tweets and Retweets are and the importance of followers.

Twitter’s Help link can be found by left-clicking your profile picture and scrolling down to the word Help or by clicking Help in the bottom dashboard.

The help homepage is pretty stylish, with a prominent white search panel where users can search for what they’re looking for. Underneath there are six key headings for commonly asked questions and even further down there are further sub-headings, a video tutorial and trending topics. Right at the bottom of the page there is an footer with some Quentin Blake-style cartoon people, presumably a hapless user and some friendly Twitter support staff in their Twitter-Blue uniforms. All very quaint but slightly disjointed if you compare the style of the trendy header with the children’s book illustrations in the footer. 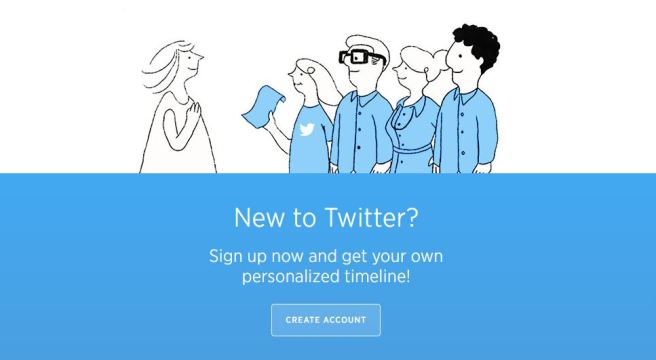 Just testing it out as a “new” user to get to grips with the basics, there is the ‘Using Twitter’ section which introduces to the general concepts and there is a useful ‘Getting started with Twitter’ page, along with a glossary which even experienced users might find useful.

The Twitter Support account is a great little feature. By creating a support account in their own social networking service, it not only encourages user engagement but the process turning to help becomes a seamless part of the Twitter user experience. It’s very neat.

Commonly asked questions were mostly account-related, either being locked out or wanting to deactivate an account. For more complex issues that require assistance or intervention, the Twitter staff ask users to log a support case, referring them to this page here.

There is a nice and simple video tutorial about how to mute or block users featuring the same Quentin Blake cartoons. It is nicely put together but I think it’s a shame there aren’t more of these, like a bank of different tutorial videos. The only example I could find on the help site was how to mute a person on Twitter (I’m guessing this was the most commonly asked question the support team were asked):

I checked Twitter’s YouTube channel and there is a slightly longer version of this video, detailing how to block and report users but that was all. I think they’ve missed a trick here but I guess any answered questions can be Tweeted to their support account.

It’s not so much a hidden feature but something I didn’t know about are the Twitter keyboard shortcuts. This list can be accessed by clicking on your profile picture and clicking Keyboard Shortcuts on the menu.

Another neat trick is the ability to embed Tweets. This can be done by either clicking the   ••• More (ellipsis) icon and selecting Copy Link to Tweet or Embed Tweet.

It’s quite a nice way to enhance content on a webpage. News sites in particular use this feature as a way to embed quotes from people, normally famous people or politicians, who have written something newsworthy on Twitter.

While it has some cool features, I would have thought Twitter could have added some more innovative aspects to their help, videos or maybe Vines in particular. I think the Twitter Support account is a good idea and it’s clearly being used quite actively. However, this could also be an indication that not enough people are using the help. Additional videos on recovering passwords, unblocking an account and deactivating accounts and sharing them on their Support account would probably halve the number of Tweets they receive. Despite this, I did like the style of the documentation itself, the familiar cartoon illustrations make it approachable and the content itself is a happy medium between informal and informative.